When my youngest son, Søren, and his literature circle buddies began reading Perloo the Bold, by AVI his imagination was captured. Perloo, the protagonist, is a peaceful, fairly introverted scholar much like my son. I think they hit it off from the get go.

So in this story, Perloo has been chosen to succeed Jolaine as leader of the furry underground creatures called Montmers. When Jolaine dies and her evil son seizes control of the burrow, Perloo must step up to the plate.

During the second week of thinking deeply about the story, my quiet, unassuming son slipped under the loft where we keep our overflow art supplies and came into the study arms loaded with a box of assorted Fimo clay. He got to work conquering his idea. 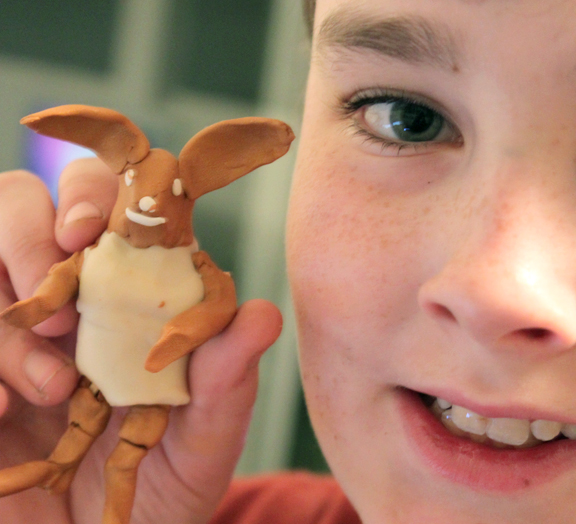 When I asked him about the project he told me he was making a claymation film of Perloo the Bold. Søren spent many hours cleverly crafting characters and posing them in one position, then another using his camera to capture the motion. 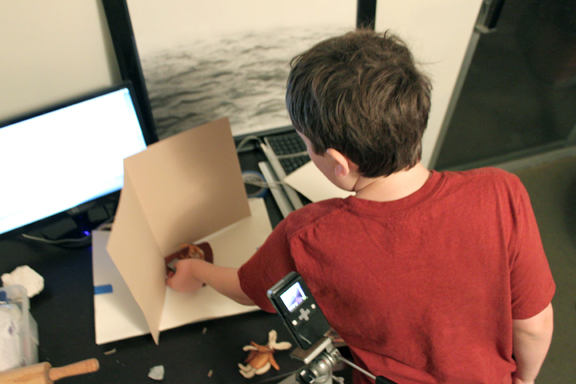 Midway in his movie making he set the project aside, went back to the art cabinet, this time for paper and colored pencils and began work on a set of original proverbs complete with ornately illuminated letters. 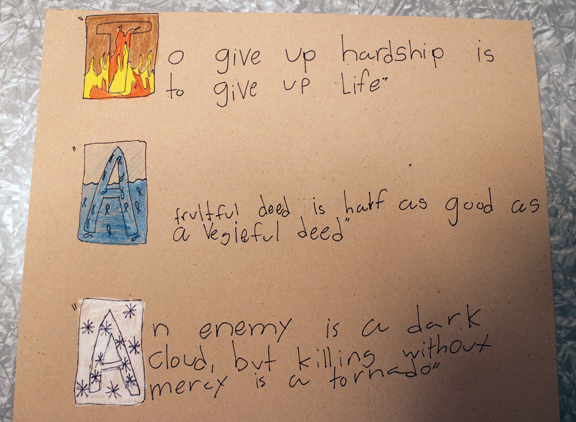 With this task complete, Søren resumed progress on his little film. When the filming was complete, he enlisted his older brother, Taylor to compose original music for his piece. He was so proud when Taylor was done and his movie was complete. When I made one last suggestion, that Søren make a title slide, he knew just what to do, “I will make the title fade in, Perloo… the Bold. Yes, that’s it.” In a matter of seconds the slide was complete. Most fascinating of all, at least to me, was the strategic placement of the slide that was seemingly intuitive. He did not put the slide up front, but a couple frames into the movie to line up with a significant change in the rhythm of the music. Fantastic!

Søren’s creative response to this book not only demonstrates his deep understanding, but that his critical creative thinking skills are alive and well.

Sometimes it is the quiet, unassuming creatures that save the kingdom. Pondering this possibility, no doubt, inspired my son.