I recently sent out a text to a handful of my adult friends who are life-long readers asking them if they have a favorite fictional character, and if they do, why? I was blasted with immediate responses and, frankly amazed by the well of insight:

“Raskolnikov, from Dostoyevsky’s Crime and Punishment, who starts off bitter, self-centered, and unable to see his own flaws, blames his hardship on others, and becomes a forgiving and self-reflective person by the end.”

“I love Samwise Gamgee. He is unassuming but willing to go where he needs to be, to silently be the support someone else needs. By the end he becomes even more brave. He is confident to stand for what he believes in, to take risks, and be a voice of hope in a time of darkness.”

“Marlow from Heart of Darkness. He starts off ignorant to the evils of the people around him but learns what evils humans are capable of. He is able to see through the lies he is told instead of assuming they are truths.”

“Ferdinand the Bull for not fighting the instigator. For staying true to himself.”

“Sirius Black. He was misunderstood. And a misfit. He stood for what he believed in. Even though his family was considered “evil”.
And he sacrificed. He was flawed and reckless. But good. Kind.”

“Aragorn is so overwhelmed and unsure of who he is despite the many prophecies declaring his life’s purpose. However, he pushes on because of those around him and his desire to serve them and truth.”

For me it’s hands-down Francie Nolan who, like the tree in Brooklyn, thrives under impoverished conditions—emotionally, intellectually, and physically. Francie demonstrates the tenacity that is seeded in us all. She works hard but doesn’t let work squelch her imagination. Francie is a hero in my eyes, ghost of the American Dream.

A Tree Grows in Brooklyn was my grandma’s favorite book. And this is saying something seeing that, as a young person, she read her way through the Santa Monica Public Library.

I never understood why this particular book tangled itself in her heart until I re-read it a few years ago and it dawned on me that my grandma saw herself in Francie.

Grandma’s father, for most of her childhood, like Francie’s, was an alcoholic (thankfully, he recovered, but much later in life). And she grew up in the tumultuous 30s, a product of Great Depression. fairly impoverished until later in life.

Pretty sure I know why, as an adult, just starting a family of her own, she fell in love with Betty Smith’s 1943 semi-autobiographical masterpiece. And, now, when I read this book (over and over for sure), I will see my Grandmother in Francie.

I am constantly struck by the unique insights readers bring to the characters they encounter. But I am also saddened that often times stories are simply read to get to the end and check off a box. None of the friends who texted back with lightning speed read to check off a box. They have spent a lifetime cultivating a friendship with books. And this is the heart we have built into our curriculum.

So where do we begin?

First, we encourage all readers to be the tortoise, not the hare. We believe that readers should never race through a story.

Second, never belabor a story to the point of derailment. You know what I’m talking about, those “literature” programs that slice and dice and teach and preach until the story is a sad, small reflection of its true self. We believe in balance. It is important to enable our students to read closely while challenging them to think creatively as they construct ideas. Along the way, when it comes to discovering the depth of a great character, we need to help our students acquire the skills necessary to articulate their observations.

Our program allows students to:
Keep a journal of individual observations of characters.
Develop a collection of words to describe the characters they encounter.

As we get ready to begin another school year, we’ve created a brand new tool to help students get started—our downloadable character lexicon. Simply print in color or black and white. Your student can cut cards to create a deck that can be used to describe the characters they explore.

Enjoy this little treat, and feel free to pass the link on to your friends.

We readers know they they are people who don’t exist but we get involved anyway.

These characters, like us humans, are not one-dimensional. They are the tragically flawed heroes that inspire us to action—even if that action is simply a smile and a sigh and a moment of introspection at the end of the read.

“A bear, however hard he tries, grows tubby without exercise.”

“All we have to decide is what to do with the time that is given us.”

“Real courage is when you know you’re licked before you begin, but you begin anyway and see it through no matter what.”

“We are such stuff as dreams are made on, and our little life is rounded with a sleep.”

The main thing to keep in mind when considering the “character” of a literary character is this: Does the character act/think/feel this way all the time, or is this only a momentary response?

Just like real life, a character’s actions speak louder than words. Take Goldilocks. We’re all familiar with her adventure in the home of the three bears and her conundrum deciding which porridge to eat. On the surface, at first superficial glance, Goldilocks seem cute, an innocent little girl. It might be easy to describe Goldilocks as simply curious. Is Goldilocks always curious? Sure.

But might we infer that she is hungry or confused? If so is she always hungry? Always confused? And do these traits often lead her into all sorts of mischief? Maybe in the moment.

Let’s think again. What do the actions of Goldilocks within the context of the story really tell us about who she is?

Goldilocks seems greedy—eating food that does not belong to her without asking. She is for sure picky—dipping her spoon into every bowl before she finds the one she feels is “just right.” She seems selfish—freely taking for her own whatever goody presents itself. But is this who she is at her core?

These are aspects of character we gather about Goldilocks as we read her story. As we trace these traits throughout the story. We stumble upon more evidence later on when Goldilocks undergoes a similar situation involving the beds of the bears. In the end, these traits seem to be ingrained in her personality and give us insight into who Goldilocks is as a whole character.

The traits of Goldilocks are perse, but I think we’d all agree her actions at the home of the three bears are greedy and picky and selfish.

When it comes to character traits, literary characters truly are the sum of their actions.

Welcome to Blackbird & Company! If you’re looking for a fun and inspirational language arts program, we have everything you need. Whether you are in a classroom, a homeschool, or an independent study program, we want to empower you, encourage you, and give you confidence to Take Flight and begin the adventurous journey of literacy with one of our Grade Level Collections.

Many thanks to our resident artist, Sara!

"Until I feared I would lose it, I never loved to read. One does not love breathing."

Louisiana, 1995. Texas, 1996. Ontario, 2009. Mississippi, 2017. These are a few of the times and places Harper Lee's To Kill a Mockingbird has been banned. The novel, published in 1960, has met widespread disrepute since the 1970's. It has been taken off of bookshelves, removed from reading lists and syllabi, kept away from students' impressionable minds.

Scout spends a good two-thirds of the novel listening. And so, over the course of the story she observes, offering her own opinions and views about matters but nonetheless clearly still a child learning to find and stand by her own beliefs. It seems like Scout’s transformation should be obvious and central to the plot of the story. But for me, her metamorphosis is subtle, as perhaps a person’s change of heart would be. Shifting and changing in slow movements like the hands of a clock, seemingly imperceptible but moving just the same.

Truth is rarely easy to swallow, rarely comfortable. And that is where many have issue with Lee’s novel. She did not shy away from truth. She could not, she lived it. But I would hope that many skeptics would change their tune if they took into consideration when To Kill a Mockingbird was written. Lee penned a present truth, calling into question the very framework of the society she grew up in. By doing this she challenges the reader to bring about a world that acknowledges those who are shoved into the shadows, speaks for those who are made silent, one that battles stagnate indifference.

I bought these cookies at an after-Christmas-sale for $1 nearly 7 years ago. They have a shelf life in common with Peeps!

I keep them tucked in a drawer with my poetry trinkets. I take a peek every now and then when I need a reminder.

Much more than stale crumbs,

this is the wonder of chemistry 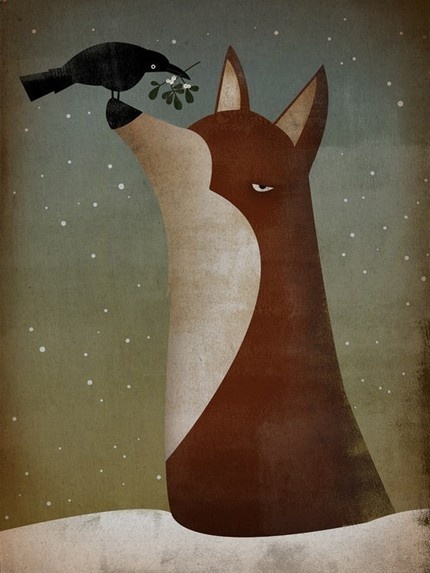 Rock is greater than scissors,

Crushing is greater than slicing,

Scissors are greater than paper,

Slicing is greater than folding,

The crumpled skin of a dry lotus

Paper is greater than rock,

Folding is greater than crushing,

Flesh over the face of stoic stone

This after Thanksgiving craft bears repeating! Thanks Tracey…

I am the Martha Stewart generation—a young mom before the days of DIY, blogs, Handmade Nation, and Etsy (and email and cell phones for that matter). Crafting in those days was mostly the realm of groovy-hippie-types or country-calico-quilters. And although I had a certain appreciation for both asthetics, I didn't quite fit in anywhere on the maker's spectrum. All that changed when I first laid eyes on the premier issue of Living magazine. Everything about it ignited my graphic-designer-modernist tendencies; the sophisticated color palettes, the charmingly smart photo styling, the graphic play of patterns and materials, everything seemed perfect. And I wanted to make stuff like that!

I credit Martha for inspiring me to make things that I liked and that felt like "me". She brought both class and wit into handmade objects and she creating things with one's hands. making things with my hands is both a soul-nourishing and using my hands for more than just clicking and typing makes me feel human, creative, like I'm both giving and receiving. 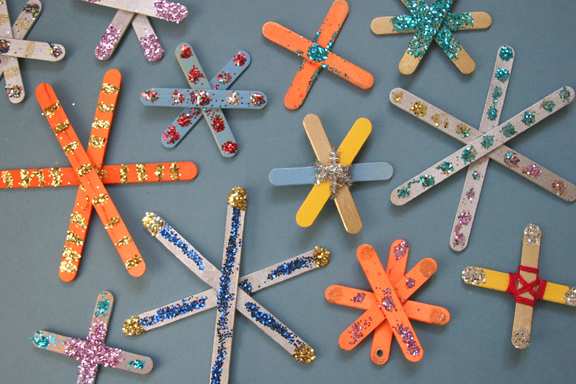 So let's get to making:

These popsicle stick stars are my favorite—well suited for mass production, quick to put together, and infinitely customizable.

The possibilities are limitless.