As summer sizzles her sunshine, be inspired by a delightful collection of clever images at our Write it…! board on Pinterest to write a poem or two. Write about some whimsical or fantastical creature from your imagination. Begin with sentences that you break into poetic pieces.  Remember to “show” the reader concrete sensory details. Take inspiration from the creativity of Lewis Carroll’s “Jabberwocky” and William Blake’s “The Tyger.”

This one lived beneath the kitchen sink:

When I was a child, I could hear its

Subterranean gurgling from the pipeline guts

Of the basement. I could have sworn I saw

The tip of its fin peek out from the drain,

Or heard the snap of its jaws, with its many

Monstrously tiered teeth after turning the faucet off.

A poem about “what-is-a-poem” is an Ars Poetica.

Sometimes a poem is as small as a list.

Sometimes it encompasses all the words we need.

Sometimes a poem is restless buttons  in a jar. 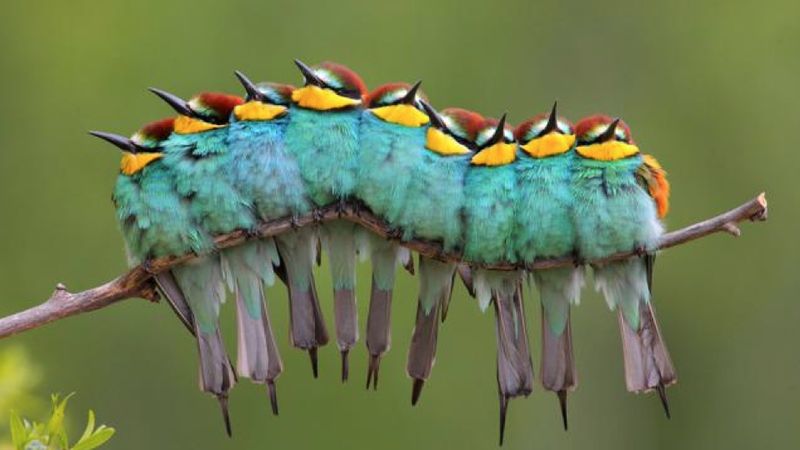 Write poem that is at once a story describing an image or event or memory. Be imaginative. Think Caterpillar of Birds. Be the blind man who thinks he is describing a snake but is actually describing an elephant. Draw more inspiration from metaphor and synecdoche.

“Dropping a Plate While Washing Dishes”

I nearly caught it—

the plunge of dish from hand

frame by frame was frozen

as the slippery china slid,

from my gloves, and the wild waltz

its spiral to floor: one frame remains

my heartbeat expanded into

the second when the runaway

above the unforgiving tile,

left behind on a train platform,

even after the floor burst

into a kaleidoscope, shreds

Winner of the Lee Bennett Hopkins Poetry Award and recipient of an ALA Notable Children’s Book Award, Douglas Florian is the author and illustrator of many children’s books. He believes there is only one rule when it comes to poetry, that there are no rules. Douglas Florian gives credit to his father as his first art teacher, who taught him to love nature. He begins his poems with research of the real thing and then uses that information to create an imaginary poem. Douglas Florian lives in New York City with his wife and five children.

What is a poem anyway?

I don’t want to
because boys

Meet Jack, who tells his story with a little help from some paper, a pencil, his teacher, and a dog named Sky.

Although this guide includes many of the same elements as the other Level 1 guides, such as vocabulary and comprehension, the format is unique.Each week, your student will be encouraged and guided to write poems in the style of each poet being introduced in the story.

Now he’s eleven, and his life is about to change again. His teacher, Ms. Marcus, is showing him ways to put his jumbled feelings on paper. And suddenly, Lonnie has a whole new way to tell the world about his life, his friends, his little sister Lili, and even his foster mom, Miss Edna, who started out crabby but isn’t so bad after all 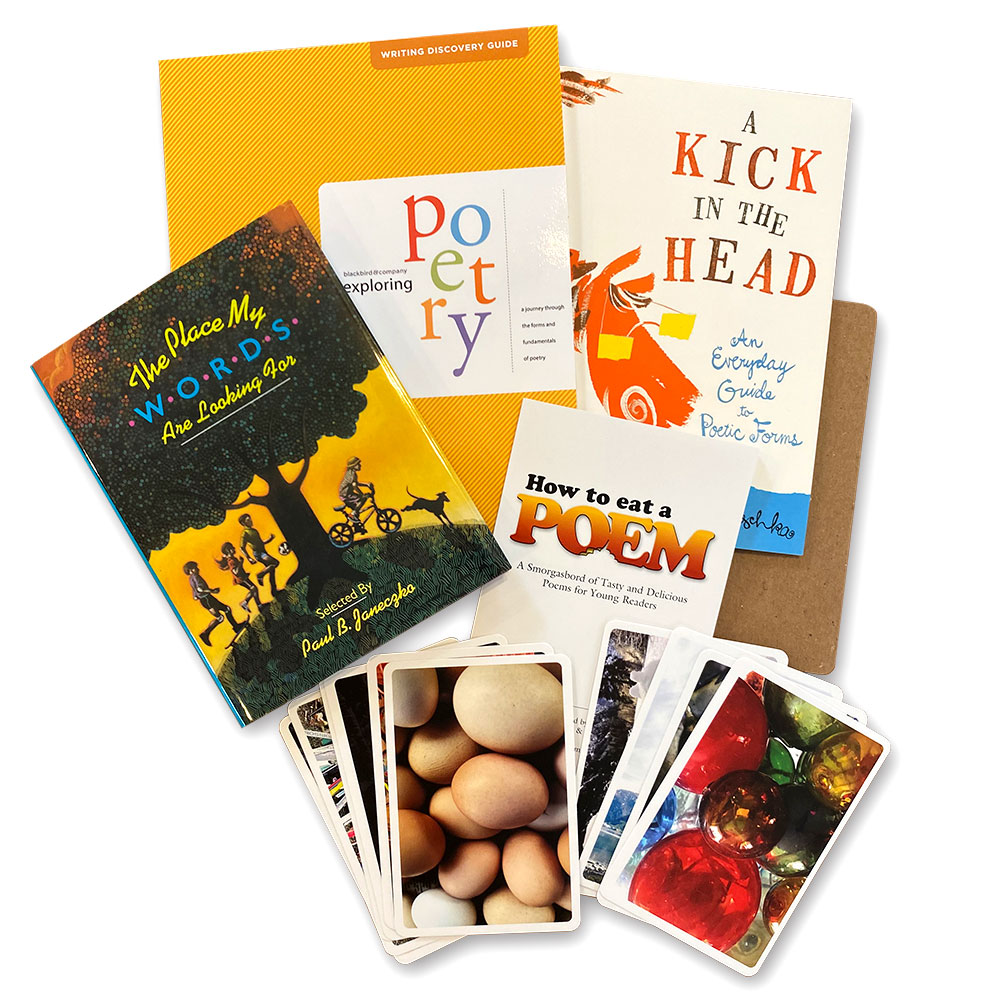 Discover the poet within you!

This unit will help you discover the craft of writing poems and the delight of reading poetry. Over the course of seven weeks you will be introduced to some of the basic techniques used by poets, explore excellent poetry, and practice writing original poems. Each section is designed to be completed in about two, one hour sittings.

I bought these cookies at an after-Christmas-sale for $1 nearly 7 years ago. They have a shelf life in common with Peeps!

I keep them tucked in a drawer with my poetry trinkets. I take a peek every now and then when I need a reminder.

Much more than stale crumbs,

this is the wonder of chemistry

Rock is greater than scissors,

Crushing is greater than slicing,

Scissors are greater than paper,

Slicing is greater than folding,

The crumpled skin of a dry lotus

Paper is greater than rock,

Folding is greater than crushing,

Flesh over the face of stoic stone

These pumpkins don’t grow on vines but they have something in common with fortune cookies and piñatas.

The Recipe:
1. Take a lunch-sized paper bag and fill the bottom with torn paper.
2. Before twisting closed, insert a handcrafted thanksgiving haiku or two.
3. Twist the top of the bag tight.
4. Paint using pumpkin colors.
5. After the paint is dry, use ribbon and raffia to decoratively seal the stem.

Display during the Thanksgiving season and tear open when it’s time to celebrate gratitude.

April is just around the corner. It’s time to think poetry.

Who reads the Newt News?

How many lumps on the Bactrian’s back?

How many words rhyme with weevil?

What does the hawk remind the reader to be thankful for?

In our Earlybird Douglas Florian Discovery unit, students will explore beautifully illustrated collections of 21 poems. Each poem is pure silly fun blending science and whimsy to teach the reader about life in the sea, scaly slimy creatures, mammals, spiders, insects, and our fine-feathered friends.

Winner of the Lee Bennett Hopkins Poetry Award and recipient of an ALA Notable Children’s Book Award, Douglas Florian is the author and illustrator of many children’s books. He believes there is only one rule when it comes to poetry: There are no rules. Douglas Florian gives credit to his father as his first art teacher, who taught him to love nature. He begins his poems with research of the real thing and then uses that information to create an imaginary poem. Douglas Florian lives in New York City with his wife and five children.

Your 1st and 2nd grade students will not only write and illustrate poems inspired by the Florian poems, they will explore the traits of characters, acquire new words, and practice making sentences. More importantly, they will enjoy exploring the art of poetry.

To begin this project, go the the library and gather a collection of shark-picture-books. Read and enjoy at a safe distance. Sharks have sharp teeth.

Next, write a sentence or two about a shark incorporating some true facts and some not-so-true facts (after all, this is poetry). Be sure to include a simile (use the word "like" or "as" to compare the shark to something).

Now write the shark sentences around the shark shape in, once again, very light pencil. When the sentence is spaced and spelled well, trace the words in black Sharpee.

Finally, the fun part… Mix up some deep-sea-watercolor blue and wash it right over the whole thing. Swish, swash, that's right!

And when your shark poem is dry, beware of the blur that is caused when it swims right off the page as all good poems should.

Butterflies are blossoming for the month of poetry!

These lovely creatures began with a lesson on the life cycle of this intricate insect and the book, A Blue Butterfly: A Claude Monet Story by Bijou Le Tord.

Each sentence was thoughtfully considered. Each word matters in a tiny poem! I find that offering little phrases such as, "Butterfly, you…" or "My wings flutter…" or "I am flitting…" (and I'm sure you will come up with a few of your own…), help students overcome the "I Can't" road block. Thing is, they CAN! Most often the sentence starters disappear, over taken by the unique creativity of each writer's unique voice.

Next, we traced a simple butterfly shape and set it free from sheets of watercolor paper. We used only shades of blue—blue watercolor, blue colored pencil, blue pipe cleaners.

And the result is poetic.