Home » Habits of Being

The next time your student gets tackled in the I CAN’T zone, share a story of your own.

Yesterday I was shopping at Trader Joes, contemplating an almond milk purchase when a good friend approached me and said quite simply: “Why don’t you make your own?”

This suggestion set off a cascading thought process in me that went way beyond the situation at hand. All in a millisecond I thought about the many times I had thought about making my own, the videos I had watched, and the numerous blog posts I had read. Still I had never “pulled the trigger” so to speak. Now, I’m smart enough to know we all have “stuck” areas in our lives. There are things we aspire to in life, but we often get overwhelmed OR SOMETHING and are stopped in our tracks. Who knows all the things that hold us back. I suspect the problem has myriad roots.

Anyway, back to Trader Jones, what happened this time is that my friend continued: “Just soak 1 cup nuts (any nuts) overnight in water and in the morning drain the nuts, add 3 cups of water in the blender, and blend to liquify.”

There was something in that moment. I think it might be that the process was presented so simply to me that I thought: “Okay it’s time to do this. I have almonds. I have water. I CAN do this…!”

And so I did. I added a pinch of salt and a dash of vanilla too. And the result was delicious—you don’t even have to strain it if you don’t want too! There were no additives so MY almond milk tasted so good!

I think sometimes the moment becomes right to make a move into the stuck zone. It’s so easy to over complicate things in our minds, to Pinterest an idea to death! In the case of almond milk, you know, make it all pretty with mason jars and ribbon and chalkboard labels,etc,etc, etc. when the true beauty is in the MAKING (and consuming) of the scrumptious drink itself.

It felt SO good to FINALLY just do it! And the icing on the cake? This is going to save me a ton of money!

Thing is, a growth mindset is NOT always easy. Students are NOT always successful when they try, but they ALWAYS learn something that is useful. Something that will help them in the future when they are faced with something new to learn. So the next time your student shrinks into the “I CAN’T” zone, share a story of your own, hum Dory’s song, and just keep swimming!

PS By the way, my friend said the roasted unsalted hazelnuts from Oregon at Trader Joes makes an incredibly good milk. No fixed mindset here… I’m making some!! 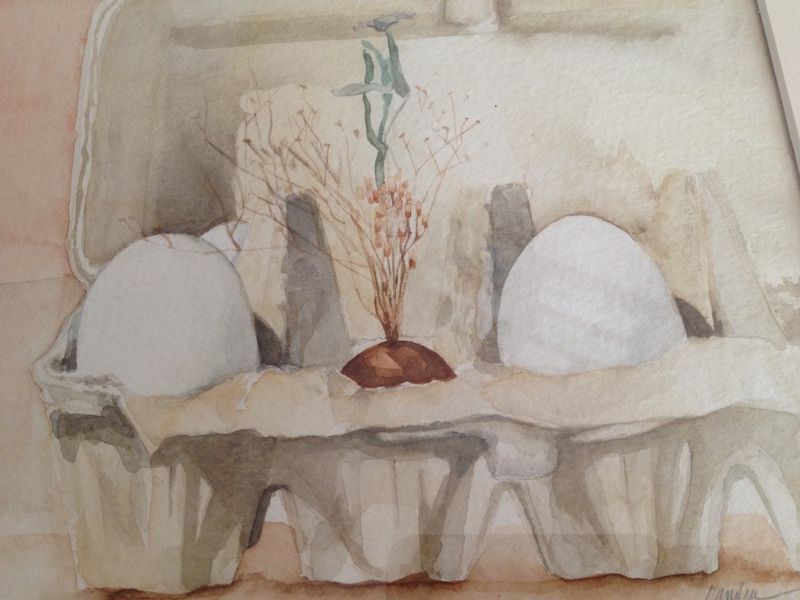 This is not a typical high school project.

This is a watercolor composition, a gift from a friend.

This is the prized possession that hangs in my kitchen with Mona Lisa’s ubiquitous gaze following my paces patiently, “Kim, you can.”

Lore has it that Sandra’s high school watercolor teacher offered an automatic “A” to anyone in the class who anyone who could paint an egg—a trememdously difficult task to accomplish well.

Now I’ve never imagined this teacher’s comment as a dare, but rather something more like an Eeyore-under-the-breath-utterance that he hoped might someday come to pass. I’ve never imagined snarky, or cynical, but more someting akin to longing, the longing to motivate.

And I’ve never imagined Sandra’s tackling of this teacher’s offering as anything other than a response to the Muse, a delighted response to the spark of imagination. Sandra simply said, “I can.”

The sheer whimsy of the composition is my proof. There is not one guile puddle in sight.

Thing is, you might look at this painting and respond, “No, I can’t.”

But you probably said that about tying your shoe, reading The Cat in the Hat, or adding five apples and three plums. But you can, right?

But many children who might have will not because they are not inspired to try. All children have precious potential. And this is why I spend my days encouraging children to press into their important work.

Children who are encouraged to engage in the right kind of practice over time develop Habits of Being and habits of being give us the gumption to say, “Yes! Yes, I can!.”

Who would have imagined that, all these years later, a teacher’s nudge and Sandra’s creative response would continue to resonate, “You can.”

I’m so thankful for my dear friend Sandra. 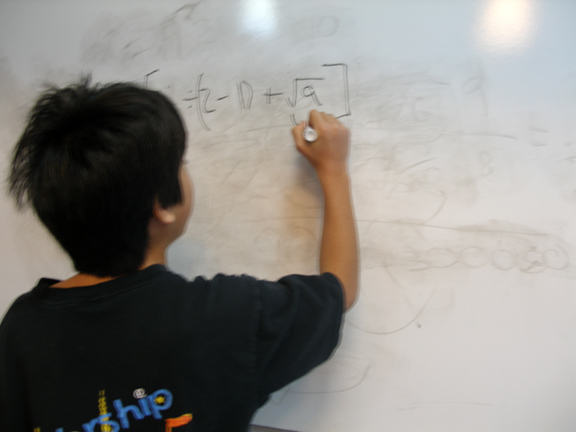 Too bad this photo is blurry, the moment was lucid …

One day at lunch Andrew and Hunter were hanging in the classroom. Andrew kept crafting and solving problems, over and over again (for fun). He would fill the entire whiteboard, erase, then start the process again. Hunter sat by amazed, longing to grab the nearest math book and tear it apart one page at a time for origami, or a possible bonfire.

Some students possess math genius. Some are comedians!

The world needs both. 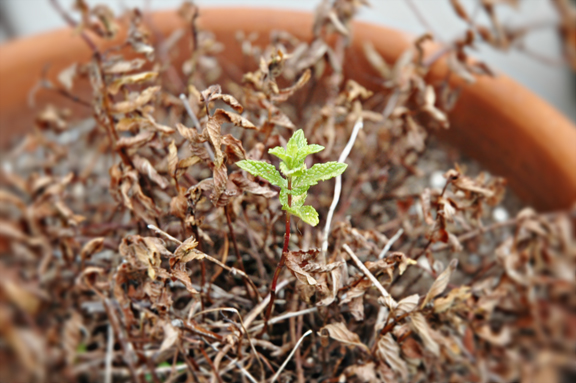 There is always hope, or so they say.

I went out to check on my garden after being gone on vacation. I had asked my teens to water while I was away and for the most part they got it right. But alas, they missed the beautiful pot of mint that I had finally gotten to grow back after a long rainy winter.

It looked really dead but I watered it anyway thinking that maybe, just maybe, there might be life below the surface. There was! A week later a sprout appeared and I marveled. I just stood there thinking (always dangerous) about it and this led to my feeling hopeful about a lot of things.

Life isn’t always as it seems. It can look very bleak and discouraging, but there is often a turn ahead.

How many times have our children gone through a difficult stage where we think, how in the world is this going to work itself out?

The good news is that there are seeds of growth deep inside our children and they are moments away from erupting into change, into new life. There may be steps backwards, sure, but truly momentum is going forward.

Love and patience are like water, they can bring a miracle. 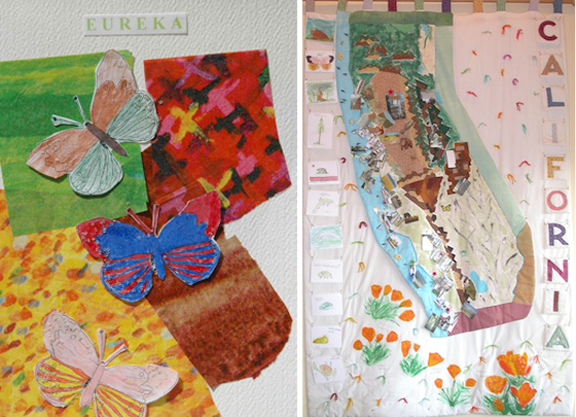 Our Waterhouse cooperative school began in Kim’s 900 square-foot, flat roof house. We hosted a diversity of characters during those early years. There was Mikalya, the darling recumbent student who taught us about her individuality as she practiced handwriting. Here was a six-year-old who could have been employed developing elaborate fonts. When it was time to journal she spent hours and hours crafting her name in script, but this was no ordinary script, this was script straight from her imagination. The term “fanciful letters” embodied the personality of the child.

Then there was Evelyn, my daughter the Kindergarten student who contentedly spent hours tracing illustrations from an entire book. Stopping to consider the academic standards involved in this task, Kim and I realized that in this single activity Evelyn not only met, but transcended certain state standards. Tracing complex illustrations, Evelyn developed her fine motor skills, strengthened hand-eye coordination, became aware of the connection between images and words, thought deeply about character and plot development and, perhaps most importantly, completed a complex task that was personally meaningful. Fast forward to high school, Evelyn would capture that certain something that made Mikayla Mikayla in the lines of a poem, “Dreamer Girl dangles / Her feet through downy clouds / Wiggles her toes over the earth / Beaming.” I have no doubt that her ability to make this profound observation about Mikayla’s individuality is in part due to the observation skills she learned to attend to as a child.

Reminiscing on our accomplishments during those first three years in San Luis Obispo borders on poetic:

• That cool woven stool that took so much time

• Pinwheels and the tee pee

• Lewis and Clark and US history quilt

• Crater experiment with marbles and flour

• Volcanoes and mapping the systems of the human body

• The rat maze and the rabbit’s chariot

• NASA launch and the Smithsonian

• Pumpkin patch about a thousand times

• Teddy Roosevelt and the 13-year-old expert in NYC

• D-Day and the beaches at Normandy

• Chinese history and the history of Israel

I will never forget that first year we reserved the Community Room at our public library for a little open house, a time to help our students celebrate their accomplishments. My brother-in-law, Mark had one comment, ”Evelyn did more work in Kindergarten than I did in all of elementary school.” 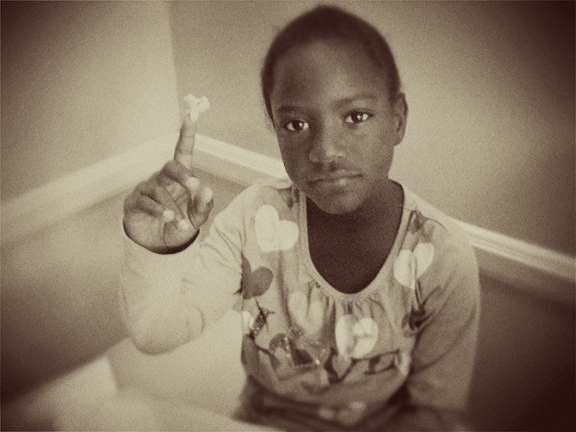 Today seven-year-old Mikayla, the youngest girl in our school, watched me climb on a countertop in high heels to fetch a pot for tea and observed, “My mom would never do that.”

“I’m me,” I replied. This gave me an idea, “So what makes you, you?” Everyone in earshot eagerly chimed in (simultaneously of course):

I like to run, other people don’t have to.

I like peanut butter, so does Michael, but Isaiah and Mikayla don’t.

Dirt and lizards and pretty flowers.

Ducks and monkeys and piano and drawing.

When I asked them to think about how school helps them become more fully themselves, the room was struck silent. Then, hesitantly the youngest girl in our group whispered a reply, “Courage.”

“You are right,” I applauded!

This little student, brave enough to raise her voice to a whisper, reminds me of Mark Twain’s booming voice whispering through time, “Twenty years from now, you will be more disappointed by the things that you didn’t do than by the ones you did do. So throw off the bowlines. Sail away from the safe harbor. Catch the trade winds in your sails. Explore. Dream. Discover.”

Categories: Habits of Being, Momologue

The art of learning is much more than amassing knowledge. For children to acualize their own unique creative genius, they must be encouraged to engage in the work of discovery.

Blackbird & Company curriculum encourages the child to acquire academic skills and, along the way, practice using these skills to bring shape to their original ideas. Over time, children will develop rhythms of routine culminating in the development of Habits of Being that enable them to accomplish long-term meaningful work. As learners, children are capable and strong, with the potential to tap into the satisfaction of intrinsic rewards. Children are complex beings, and so we strive to offer strategies for individualization within each of our offerings including foundational and explorative quests designed to help the child tap into his or her strengths. The work of weaving connections between education and the child’s purpose in the world at large is the art of learning.

recognizes the extraordinary in each child

believes that children are capable of self-directed learning

adapts to the brilliance of the young mind

inspires the student toward purposeful action

offers depth rather than breadth

…is a sailing instructor

“I’m not afraid of storms, for I’m learning how to sail my ship.”