Since my daughter was a wee one, we've always made a summer wishlist—places to visit, things to make, people to see. Every idea gets put down on paper to hold us accountable to some good memory-making and to have a go-to list when boredom creeps in. At each summer’s end, the truth is that we would usually only have accomplished a small handful of things on the list and I’d feel kind of guilty and dissapointed in myself for not following through. As I get older and wiser however, each end of summer comes with less guilt—we'll do what we can and enjoy it fully…but no regrets allowed for what is not done. Certain items are simply forgotten forever and some get moved to next summer’s list for another chance at life.

Making a teepee is one thing that’s been on the list for about five years now. My daughter REALLY, REALLY wanted one, and so did I actually. Teepees are cool, plain and simple! As this past June rolled around, I came to the sobering realization that it was Cloe’s second to last summer before graduating from high school. In the words of David Byrne, "How did I get here?" OK MOM…TIME TO MAKE THIS THING A REALITY! 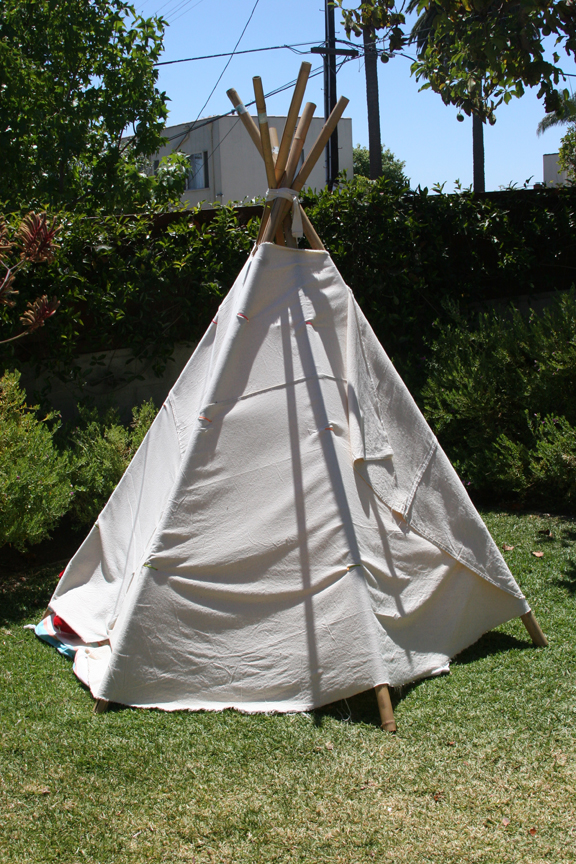 I love the internet. I simply Googled "DIY Teepee" and within seconds I had a list of approaches and step-by-step instructions on how to make our Arapaho dreams come true. I took "Home Ec" in junior high and I have a pretty crafty mom so I can find my way around a sewing machine. Straight lines are my specialty but beyond that, sewing isn't really my thing and I knew in my gut that I didn't want to pull it out for this project. I wanted to take a more resourceful approach and less of a perfectionistic approach—more intuition, less precision! I also made it a personal challenge to build our teepee using supplies I already had lying around, supplies long-ago abandoned and intended for projects that never got done. I wanted to get in touch with my inner Sacagawea and use what I had and what I knew to build something.

After studying a handful of tutorials and formulating a loose plan in my head, I set to work, feeling excited but a little nervous. After about two hours, we literally had an awesome teepee standing before us and my daughter and I were inside, sitting indian-style (of course) sipping iced tea and reading magazines. It was great fun and many hours have been enjoyed inside by all this summer. Although for us the goal of this project was a simple summer backyard dwelling, you could easily incorporate it into your study of Native Americans, architecture, science or handwork. It really is a fun and doable project (which I should have done years ago)!

Here’s how it all came together:

1. Most tutorials recommended eight to ten, 12-foot poles. Panic! I only had six, 8-foot bamboo poles. I reminded myself that Sacagawea did not have a Home Depot down the street to bail her out so I determined to just press on and make it work.

2. For the cover I used a large canvas painter's drop cloth that had been collecting dust, unused for five years in our shed. The material was perfect and the size eliminated the need for sewing panels together to make a piece large enough to cover our poles. Bonus!

3. I folded the dropcloth in half and used a pencil/string device to outline a half circle. I cut out the semi-circles and ripped the cloth in half which gave me a nice rough edge. 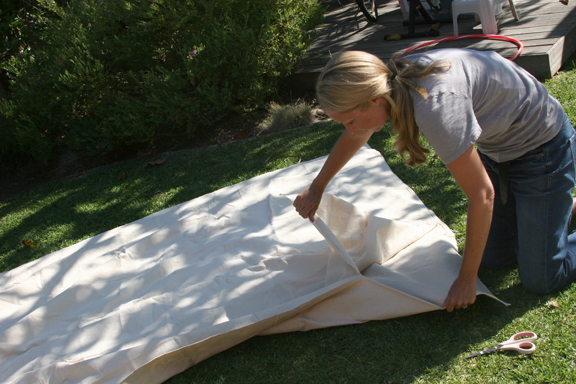 4. Cable ties are one of the handiest inventions ever and I had about 30 leftover from some other who-knows-what. I laid three poles on the ground and used one to hold them together at the top. I set up those three poles, and then positioned the other three in between each wedge. It was working! Our teepee was starting to look totally legit! I ripped a strip of canvas from the scraps and tied all six poles together for added stability and frontier charm. 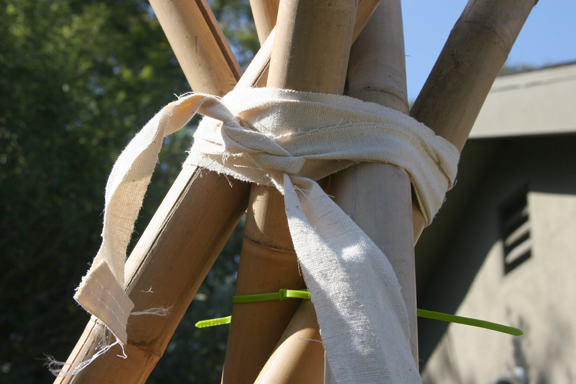 5. I then took one semicircle and draped it over the poles. I was delighted to find that the length was perfect in proportion to the poles! The craft fairies were on my side for once! I thought for sure that I'd have to pull out the dreaded sewing machine for this part but then I stumbled upon a box of colorful metal brads I had bought in a weak moment eight years ago at the scrapbooking store. These will work, I know it! 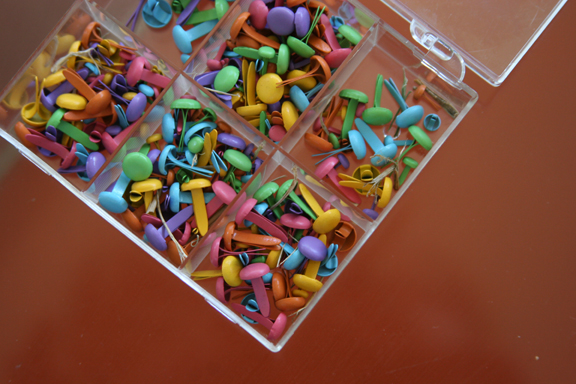 6. I used the brads to attach my two semi-circles together to create the conical shape that the cover needed to fit properly around the poles. The weave on my canvas was course enough that I could just manually push the brads through the two layers of fabric and it was thick enough to hold together without ripping. I trimmed the extra canvas with scissors to tidy up the inside seam.

7. Lastly, I decided to use the cable ties again to hold the cover in place to each pole and create a cleaner, tighter shape. I simply poked two slits in the canvas with an exacto knife at each place I wanted a cable tie and then I fastened the cover to the poles. 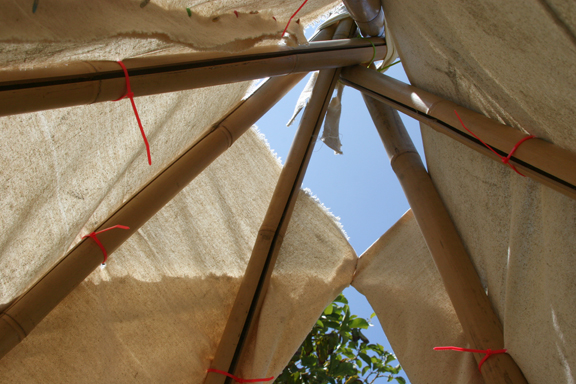 8. Lastly, I adjusted the poles a little so that the teepee was as stable as possible and pulled a small quilt from the linen closet to cover the grass. Mission accomplished! 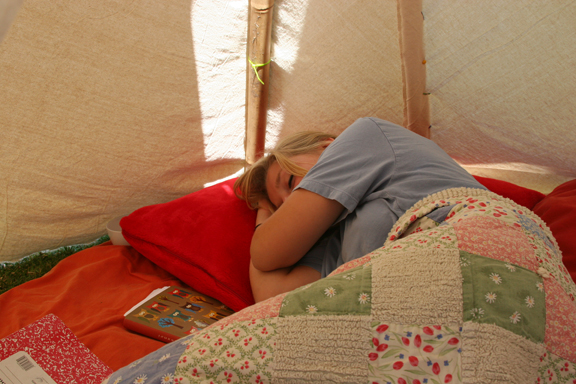